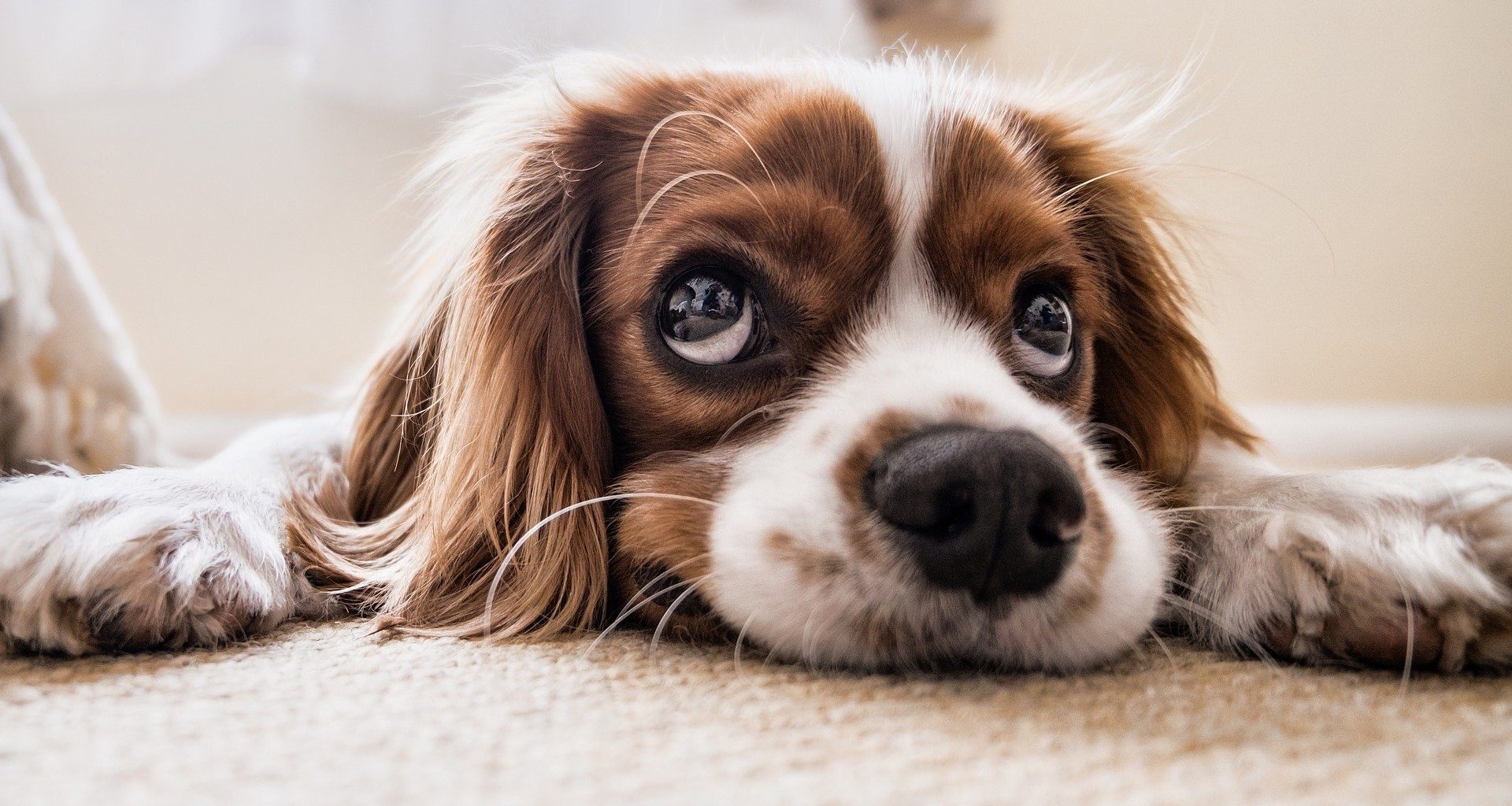 If you are a die-hard dog fan, you will definitely enjoy this one. Previously, we have discussed the history of canines without going too much into detail on dog domestication. So in this article, we are diving deeper into the origins of our favorite furry pets.

Canines have always been loyal to humans. The ancient Egyptians adorned them, Chinese emperors had lap dogs, and Queen Elizabeth I and Mary, Queen of Scots, were inseparable from their pooches. So stop whatever you are doing right now, take a seat, make yourself comfortable, and read all about the domestication of canines.

The Evolution of the Dog

According to experts, ever since dogs were domesticated, they have been influencing the development of human civilization. However, the exact geographic location, ecological conditions, and timing of the domestication still puzzle scientists to this day.

We have found illustrations of canines on tombs, scrolls, and walls throughout the Middle East, North America, and Europe, dating back to the Bronze Age. There are statues of dogs guarding the entrances to burial crypts. These relics shed some light on the origin of dogs and are evidence of their vast importance to our civilization.

Without a doubt, there’s definite evidence that the oldest known ancestor of canines is an extinct species of wolves that existed around 5,000 to 40,000 years ago. Furthermore, the evidence suggests that no other canine species was involved in the evolutionary process.

According to numerous genetic studies, the process of dog domestication began over 25,000 years ago, with one or more populations of wolves living in either the high Arctic, eastern Asia, or Europe. Experts believe that, over time, humans developed a close bond with the wolves. Humans took the so-called “proto-dogs” hunting and used them to fend off predators and other enemies.

People are fascinated with dog domestication and its history. Archeologist Henri Breuil made a watercolor tracing of an illustration found in a French cave depicting a canid resembling a wolf. It’s believed to be around 19,000 years old! This is just one of the many pieces of evidence proving that humans started domesticating wolves in ancient times. And as humans started leading a sedentary lifestyle with the invention of agriculture around 10,000 years ago, dogs became less wolf-like.

By examining the history of dogs and humans, researchers found the earliest example of a domesticated dog at a burial site in Germany. More specifically, they found the 14,000-year-old dog remains in Bonn-Oberkassel. The earliest domesticated canine in China was uncovered in Jiahu, and it originates from the early Neolithic period.

Many of the dog history facts rely on the evidence found in Goyet Cave in Belgium, Predmosti in the Czech Republic, Chauvet cave in France, and Skateholm in Sweden. The Mesolithic site in Sweden features canine burials, which further reinforces the idea of the dog as a man’s best friend. In one of the many graves in Skateholm, researchers recovered three flint blades, an antler headdress, and a dog.

While trying to uncover the history of dog domestication in the Americas, researchers found a dog burial site in Danger Cave, Utah, which is believed to be 11,000 years old. In the Americas, the persistent interbreeding with wolves resulted in a wolf-dog hybrid known for its black coat. Experts claim that the black color of its fur is not a natural characteristic found in wolves but a common feature of dogs.

According to a number of well-known sources, canines were awarded “person-hood” status, which means they were treated equally to human beings. For instance, at the Shamanaka site, experts located a grave of a dog interred in a rather formal cemetery. Interesting data on the grave shows that it’s around 6,200 years old, while the buried dog is believed to have been a cherished family member.

There are two significant hypotheses of the domestication of the dog. The first one states that humans brought wolves into their camps to tame them, whereas the other one suggests that the wolves chose to be domesticated among humans.

How did wolves choose to stick around and get domesticated? The theory claims that the trash near human villages attracted the wild animals and led them to hang around for scraps and leftovers. According to this dog evolution theory, the wolves that visited the villages befriended the humans and eventually became domesticated.

Dogs and Wolves: Differences and Similarities

In 1758, dogs were classified as “Canis familiaris.” However, they were reclassified as “Canis lupus familiaris” in 1993. Based on this change, dogs became known as a subspecies of Canis lupus — the gray wolf. In fact, according to the history of domesticated dogs, canines and grey wolves share many of the same features. For example, they both have the same number of chromosomes, and they can successfully mate and give birth to offspring.

Nowadays, the wolf-dog hybrid is one of the most talked-about breeds. It’s a fascinating hybrid produced by the mating of a domestic canine with either a red wolf (Canis rufus), Ethiopian wolf (Canis simensis), Eastern timber wolf (Canis lycaon), or the gray wolf.

Considering the dog evolution timeline and the diversity of canines, one might think that dogs and wolves don’t share any physical features. For instance, just conjure up an image of a Pomeranian and a gray wolf. Even though certain breeds such as the Husky and Malamute have still conserved many of the wolf-like features, most dogs don’t look anything like their predecessors, due to dog domestication.

For example, wolves have larger teeth, making them able to crush bones easier and quicker. Modern dogs usually don’t have to bother with food that is hard to chew. Furthermore, the head of a dog is around 20% smaller than the head of a wolf, and their legs are much shorter as well.

In addition, the trip from wolf to the domestic dog is a long timeline that led to the differences in their reproductive systems. However, the most significant difference is that the female wolves come into season only once a year in spring, whereas the female dogs may come into heat twice a year. The only exception is the Basenji breed, which shares similarities with the wolf, as it typically comes into heat once a year.

The dog domestication facts confirm that dogs resemble young wolves, as they are friendly and much easier to tame than adult wolves. Plus, wolves typically do not bark, and barking is a vital form of communication among dogs as well as between dogs and humans. Additionally, dogs do not have such a powerful prey drive like wolves do. Wolves live in packs, and their strong prey drive helps them survive in the wilderness.

Besides mentioning the obvious resemblance between huskies and wolves, most dogs look nothing like wolves, so we will skip the physical similarities. More importantly, according to a number of dog origin facts, dogs can still be considered pack animals, as they frequently demonstrate the need for a social bond with people and other canines. Furthermore, they may greet their owners in a similar way wild wolves greet the alpha of their pack. According to the experts, this type of greeting is referred to as “active submission.”

Another evident similarity between wolves and dogs is the presence of the prey drive. Based on the facts on dog origins, canines have retained the prey drive, but it’s not as powerful as the one wolves have. For example, it shows when dogs catch a glimpse of a squirrel, a bird, or another small animal they may see as prey. The look in their eyes changes, their ears prick up, and they may try to sneak up on the unsuspecting animal.

The evolution of dogs took a significant turn during the Victorian era when purebred dogs entered the scene. According to Michael Wornboys, a professor at the University of Manchester, many of the purebred dogs we love today are products of the industrial revolution. Previously, dogs were bred to perform specific tasks. For example, sheepdogs rounded up sheep, guard dogs guarded things, and retrievers retrieved game.

People started to view dogs as pets only after dog fighting was banned in Britain in the 1830s. The dog breeders didn’t know what to do with the surplus of puppies, and the gamblers needed to come up with something to bet their money on. During this period, John Henry Walsh, a sports journalist, came up with a brilliant idea and organized the very first Wimbledon Lawn Tennis Championship in 1877, which also featured a dog show.

According to facts on the domestication of dogs during the Victorian era, there were certain important rules which set out the standards for the canine participants. For instance, an authentic English pug needed to have a sleek and shiny coat of a fawn color. As if that’s not enough, the best of the best became valuable possessions for which people paid ridiculous amounts of money.

According to the dog domestication timeline, there are currently more than 400 different dog breeds around the world recognized by the kennel clubs. The kennel clubs are known for governing field trials, hunt tests, dog shows, and herding tests. And even though most dogs live with their owners and solely serve as companions, there are many canines out there that still perform their traditional duties.

When did dogs become domesticated?

Even though the location is still a mystery, most experts agree that the domestication may have taken place between 14,000 and 6,400 years ago. Based on a proposal, it’s believed that the original wolf population split into West and East Eurasian groups, with the latter gradually replacing the West group around 6,400 years ago.

How did dogs get domesticated?

There are many theories on the method of domestication, and we already mentioned some of them. One theory claims that wolves were adopted as puppies by early humans and raised as companions. In contrast, another theory claims that the wolves chose to stick around the villages in search of food. Mark Derr, a naturalist, believes that wolf and man formed a close bond after recognizing themselves in each other during hunting seasons.

Since dogs evolved from the Canis lupus or the gray wolf, they may be considered as an example of the domesticated wolf. Even though they still share many of the same characteristics, dogs and wolves are quite different from each other. Nevertheless, their domestication may have occurred twice, resulting in groups of canines descending from two different ancestors.

Did Neanderthals have dogs?

According to the words of professor Pat Shipman, humans formed a powerful alliance with the wolves in the battle against Neanderthals. Shipman further claims that in that period of history, Neanderthals, wolves, and modern human beings were the top predators, hunting mammoths and other creatures. Even though there’s no direct evidence of Neanderthals starting the domestication of dogs, many believe that this is a true fact and that it happened around 100,000 years ago.

Hopefully, our brief overview of the history of dog domestication helped answer some of your questions and opened your eyes to how intriguing canines actually are. Canines have served as loyal companions and assistants to human beings for ages, evolving from wild animals into the cutest members of our society. Dogs are a big part of people’s lives, and they are usually treated like kids or best friends. So whether you choose to purchase a purebred puppy, or go to the animal shelter and adopt one, remember to give your dog as much love as possible.

Hermina believes that every day is a chance to learn something new about the obscure world around us. The driving force behind her writing is her passion for sharing knowledge with others all around the world. After attaining her master’s degree in English language and literature, she has decided to join the team of creative writers dedicated to delivering the hottest content on the web. So what are Hermina’s favorite topics to cover? Animals, good books, health, fitness, self-care—you name it.

15 Reasons the Use of Circus Animals Must Be Banned