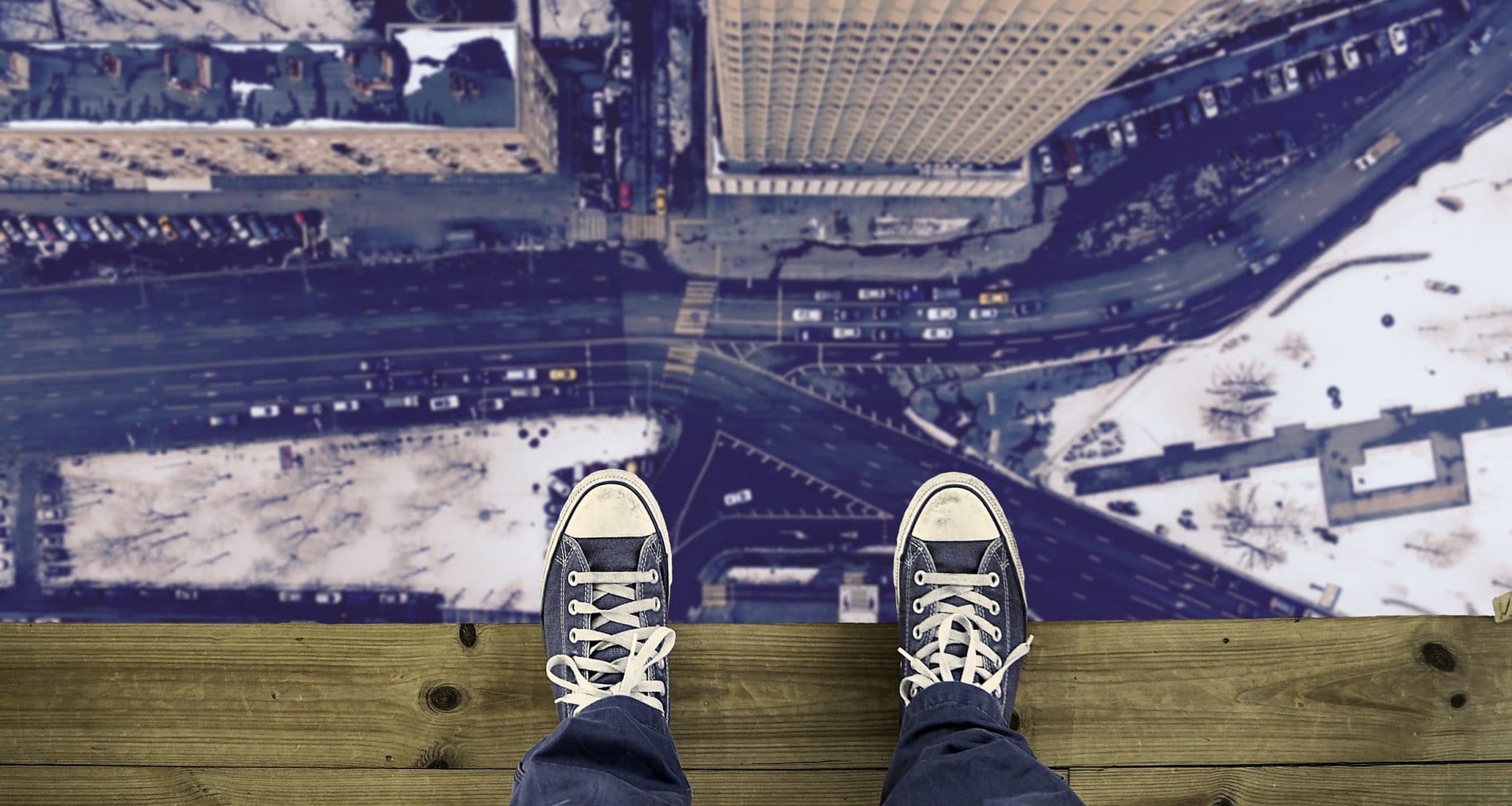 Everyone is afraid of something, but not every fear is a phobia. Even though some phobias are common, most people don’t know much about phobia statistics.

We decided to change that and enlighten you with the most prominent phobia stats. There will be talk about animal-related phobias, but other major phobia types will be covered as well.

Top 10 Phobia Statistics for Everyone

There are many phobias out there, though generally it’s common to miss the thin line between simple fear of something and a true phobia. Let’s jump right in and see some numbers.

Interestingly enough, women in America are more likely to have a specific phobia than men (12.2% vs. 5.8%).

Furthermore, around 12.5% of American adults have experienced a specific phobia in their lifetime.

If you’ve ever wondered how many people have phobias in the US, you should know that they are prevalent in adolescents.

NCBI statistics on fear tell us that the mentioned disorders come much later in life compared to separation anxiety, social, and specific phobia, which usually start before the age of 15.

The same numbers apply to both genders.

4. Acrophobia, or the fear of heights, affects about 5% of all people.

Statistics on fears inform us that people with severe cases of acrophobia sometimes have difficulties even in their day to day life. They have trouble on elevators, staircases, ladders, etc.

5. The lifetime prevalence of visual height intolerance, a milder form of acrophobia, is 28.5%.

Acrophobia statistics show that women have a higher chance of developing vHI. The group with the highest vHI prevalence in a study from 2012 were women in their 50s.

Also, the first instances of vHI are most common during the young adult years, but the condition itself can persist for a while.

When talking about the fear of flying, statistics may be very discouraging.

About 60% of people with this fear tend to become extremely anxious before and during the flight.

Up to 5% of people have clinical aerophobia, which is a crippling fear of flying, where the average onset age for this phobia is around 27.

7. About 4% of the global population has claustrophobia, the fear of small, enclosed spaces.

Claustrophobia statistics won’t shock you that much. It makes sense to be afraid of being trapped in an enclosed space, especially if there isn’t much room for breathing.

People more prone to claustrophobia are those suffering from panic attacks, anxiety, or spatial distortion.

In some cases it is developed after a traumatic experience related to being enclosed in a small space.

8. About 20% of people who seek treatment for phobias are completely cured.

Social phobias can be treated with CBT, which is short for cognitive behavior therapy, but medication is often needed to fight anxiety. These two methods account for 80% of phobia relief.

It’s also important to note that treatment should not be discarded once the person is cured, as 50% of phobics tend to relapse.

Plus, some therapies, like pet therapy, for example, could be especially beneficial to those suffering from zoophobia. It could help them get accustomed to certain animals and have pets in the future.

9. Some symptoms of phobia are trembling, an upset stomach, and lightheadedness.

Because of that, phobics usually try to avoid whatever triggers their phobias.

They would rather keep their distance, and they are most often aware of their phobia. This sometimes makes them uncomfortable and ashamed, which can trigger anxiety.

Besides the ones already mentioned symptoms, there is also the fight or flight response, heavy breathing, sweating, nausea, palpitations, dizziness, etc.

10. A phobia is often seen as an exaggerated fear, which is incorrect.

There are many myths about phobias, but underestimating a phobia is wrong in many ways. So, if your friend tells you that your phobia is not that serious, they’re probably not that good of a friend.

The Most Prominent Animal-Related Fear Statistics

We love animals, but what could possibly make someone fear an animal? Unsurprisingly, fear of spiders and snakes top the lists, but are there others? Continue reading to learn more.

11. Fear of spiders, or arachnophobia, affects somewhere between 3.5% and 6.1% of people worldwide.

If those numbers don’t seem that big of a deal, think of it as almost 500 million people that are afraid of spiders.

One of the less-known facts about phobias, arachnophobia specifically, is that it’s an exaggerated form of what was once an instinctive response to a threat.

Moreover, a study from Uppsala University in Sweden confirmed that arachnophobia is inherited. Babies and children would fear spiders even if they had no prior contact with them.

12. Between 7% and 9% of people suffer from specific phobias, such as cynophobia, the fear of dogs.

People don’t fear dogs as much as they fear spiders and snakes.

However, cynophobia statistics confirm that many people who had early traumatic experiences with a certain animal, such as a dog, can develop a phobia related to that experience.

13. About 33% of adults constitute the fear of snakes statistics.

No stats on fear would be complete without the fear of snakes.

Much like with spiders, scientists believe that evolution has made us this way. Humans have been fighting off snakes and spiders for millions of years, so it’s in our genes to fear them.

Both snakes and spiders often trigger not only fear but disgust as well.

There are many myths about snakes, and one of them is that they’re slimy. They aren’t, in reality. This is just one of many interesting facts about the fear of snakes.

If you’d like to learn more, why not read this fascinating snake bite statistics article?

14. Most people with ailurophobia, the fear of cats, had an upsetting experience with felines.

The fear of cats can also be spelled elurophobia, or aelurophobia.

Not all people with this phobia fear being bitten or scratched. Some of them are genuinely terrified of the cats’ mystical and occultish appearance, which may stem from superstition, according to phobia facts.

It’s no wonder that black cats are often shunned. Close contact and learning more about the history of cats could help ailurophobes.

Some of the Most Memorable Weird Phobias

15. About 13% of non-pregnant women fear childbirth enough to delay or completely avoid pregnancy.

Tokophobia, a pathological fear of pregnancy, can be very troublesome, as it can make some women unwilling to have kids of their own even though they might not dislike the idea itself.

Some women may also develop the phobia after they’ve experienced a trauma during their previous pregnancy.

Even though these statistics on the phobia might not seem that high, up to 78% of pregnant women claim to have had some sort of fear related to their state and the childbirth itself.

16. About 7.8% of Americans have an intense fear of clowns, also known as coulrophobia.

Coulrophobia is very common, according to statistics on phobias, but one might wonder why that is the case.

Stephen King’s novel IT, and the movies based on it may have had something to do with the spreading of this phobia and bumping the numbers.

17. Mysophobia, or germophobia, is often triggered by the obsessive-compulsive disorder.

There are many causes of phobias, and sometimes they are tough to determine. However, a person afraid of germs is likely suffering from OCD too.

They are overly pedantic beyond any health concerns, and they spend a lot of time cleaning, even when there is no visible reason for doing so.

18. About 9% of surveyed respondents are afraid of staying home alone.

In the same research, fear of failure statistics show that around 31% of adult contestants in a huge 2015 study that encompassed 1,083 interviewers confirmed fearing failure.

A close second in the study is the fear of spiders, at about 30%, and the fear of paranormal is third, with 15%.

When discussing the fear of death, statistics from the Chapman University 2017 study show that fearing death is not that uncommon.

Even though, logically, dying is completely natural, and it is bound to happen to all of us, some people have a hard time accepting it.

Their fear can be so intense to the point that they are too frightened to even go outside, thinking they might die.

Furthermore, thanatophobia might trigger other troublesome conditions, which is why it should be treated actively. In short, thanatophobia statistics are alarming and shouldn’t be ignored.

20. What percentage of the population has a phobia?

Many people have a specific phobia, a common anxiety disorder that often precedes other psychological issues.

21. How many phobias are there?

To get the answer, some math had to be done. There are about 540 confirmed phobias up to date, according to phobia statistics.

Speaking of math, a fun fact is that some people actually fear specific numbers, such as 8,13, or 666.

The names of these phobias are triskaidekaphobia, hexakosioihexekontahexaphobia, and octophobia, respectively.

22. What is the most common phobia?

According to public speaking fear statistics, the most common phobia is glossophobia, which affects up to 75% of the global population.

Most people are terrified of going in front of a crowd and withstanding the possible judgment and disagreement coming from the audience.

However, the percentage would probably not be this high if only more people were open to therapy. Those that don’t actively work on resolving the issue, may end up stuck with it forever.

There are many most common phobias out there, and it is possible that you have at least one of them:

Zoophobia is pretty self-explanatory — it is the fear of animals. It is fairly common, but most people develop a fear of specific animals, rather than all animals.

We are more likely to fear groups of animals, such as insects and reptilians, because they commonly trigger not only fear but also disgust.

The three major types of phobias include agoraphobia, specific phobias, and social phobia.

The first one is the fear of being alone in public places without an easy way to leave.

The second is the fear of social or public situations and is usually followed by anxiety.

Were these phobia statistics enlightening?

How many phobias from our list do you have, if any?

You shouldn’t be alarmed even if the list is lengthy. It’s only human to be afraid of certain things, but note that not all fears are phobias. Fear alone isn’t as intense or troublesome as a phobia.

Do you know any interesting facts about phobias that we didn’t mention here? Feel free to join the discussion in the comment section below.

Filip has a degree in English language and literature, and his studies helped him grow very fond of writing. He spent years perfecting his content writing skills while working under pressure with tight deadlines. His range is very broad, and thanks to that, he can write about almost any topic. He especially enjoys writing about tech, apps, esports, cinema, and other nerdy stuff.

The Most Elaborate HempMy Pet Reviews for 2021